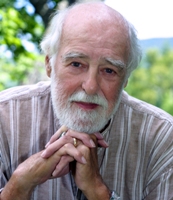 Robert DeCormier (aka Bob Corman) is an American musical conductor, arranger, and director, and a graduate of the Juilliard School. He has arranged music for many singers and groups, including Harry Belafonte and Peter, Paul, and Mary, and has worked with Milt Okun. DeCormier is perhaps most famous for his spiritual arrangements. He is the director of Counterpoint, a choral group which consists of eleven members, and conducted music for the opera Der Kaiser von Atlantis, or The Emperor of Atlantis, and Brundibár. DeCormier made a recent appearance at a holiday concert for the Vermont Symphony Orchestra. He conducted the chorus, and made an appearance with long-time friend Paul Stookey from the group Peter, Paul and Mary. DeCormier has served on the New York State Council on the Arts, and has been a member of the choral panel for the National Endowment for the Arts.