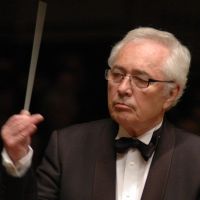 With one of the most important international careers of any Czech conductor the Chief Conductor of the CNSO Libor Pešek belongs among the celebrities on the world scene.

As Principal Conductor and Artistic Advisor of the Royal Liverpool Philharmonic Orchestra from September 1987 to May 1997 Maestro Pešek took the RLPO on their first tour of the USA which was greeted with great critical acclaim in the major cities they visited. He guest appeared on the BBC Proms festival in Royal Albert Hall, and had invitations from Edinburgh Festival. Libor Pešek has recorded extensively for Virgin Classics, BMG, EMI, Victor Entertainment, and Supraphon. His complete Dvořák Symphonies with the Czech Philharmonic and Royal Liverpool Philharmonic orchestras received the greatest acclaim.

Libor Pešek was born in Prague and studied conducting at the Academy of Musical Arts in Prague with Karel Ančerl, Václav Neumann and Václav Smetáček. In 1958 he founded the Prague Chamber Harmony and with them established his conducting career in the former Czechoslovakia. In 1980 he was appointed the chief conductor of the Slovak Philharmonic, and then Conductor-in-Residence of the Czech Philharmonic Orchestra.
In March 1996 the British Queen Elizabeth II made him a Knight of the British Empire, and in 1997 the President of the Czech Republic, Václav Havel presented him with a medal "For The Service to The Country, 1st Degree".

In 2007 Maestro Pešek has been named Chief Conductor of the CNSO and he is a President of Prague Proms Festival.