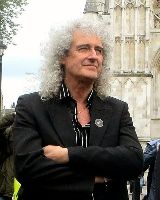 Brian Harold May (born 19 July 1947) is an English musician, singer, songwriter and astrophysicist who achieved international fame as the lead guitarist of Queen. He uses a home-built guitar, "Red Special". Queen's albums include numerous May compositions, including "Tie Your Mother Down", "I Want It All", "We Will Rock You", "Fat Bottomed Girls" and "Who Wants to Live Forever".

He was appointed a Commander of the Most Excellent Order of the British Empire in 2005 for "services to the music industry and for charity work". May attained a Ph.D in astrophysics from Imperial College in 2007 and was Chancellor of Liverpool John Moores University from 2008 to 2013. He resides in Windlesham, Surrey. He is an active animal rights advocate and was appointed a vice-president of animal welfare charity the RSPCA in September 2012.