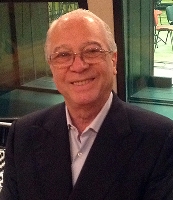 Jorge Calandrelli is an Argentine composer, arranger and orchestrator.

One of his most interesting works is the concerto for jazz clarinet and orchestra. He wrote it under the 1984 New York winter impression. With slight inflections from composers like Stravinsky and Bartók, it has 3 movements: Allegro, Adagio and Presto. Calandrelli earned for this work the "Wavedon Award" – All music composer of the year. Among others, he has been nominated for 2 Academy Awards and 22 Grammy Awards. Other credits include The Shining (1980, uncredited orchestrator), Tron (1982, orchestrator), The Color Purple (1985, adapttor and orchestrator), and Crouching Tiger, Hidden Dragon (2000, composer, music producer).

Another of his collaborators is conductor and composer Ettore Stratta, with whom Calandrelli recorded other 3 records based on Latin American music: boleros, bossa novas, and tango.

Calandrelli was awarded the Latin Grammy Award for Producer of the Year, along Gregg Field, for his work on the album A Time for Love by Cuban trumpeter Arturo Sandoval.